The flow of new sporting sculptures around Britain continues. Our enthusiasm for commemorating heroes of the past in bronze or other distinctive memorials shows no sign of diminishing. In this section, we aim to highlight a variety of statues and memorials erected since Immortals of British Sport was written (July 2013) - celebrating heroes across different eras of our sporting heritage.

For an up-to-date and comprehensive database of full-size sporting statues of men and women around Britain, see also The Sporting Statues Project database established by C.B. Stride, F.E. Thomas and J.P. Wilson at www.sportingstatues.com

Tony 'Bomber' Brown is honoured at the Hawthorns

Tony ‘Bomber’ Brown played 574 games for West Bromwich Albion, scoring 218 goals, many of them spectacular and long-remembered. Part of the successful Albion cup side of the late 1960s and early 70s, Tony Brown (although just one England cap) is regarded as one of the club’s greatest and most loyal players. A dynamic action statue, by Jonathan Wylder, was unveiled in Tony Brown’s presence at The Hawthorns and is a lasting tribute in honour of his achievements.

Johnny King is immortalised in bronze at Tranmere

A bronze statue of Johnny King, Tranmere Rovers’ most successful manager, has been unveiled outside the club’s Prenton Park ground. He took the club to Wembley five times as manager in the late 1980s and early 90s and to their highest ever league position, three times getting to the promotion play-offs in the Championship. Revered by supporters, Johnny King is now celebrating permanently in bronze. The statue was crafted by Liverpool-based sculptor Tom Murphy.

Arthur Wharton (1865-1930) was Britain’s first black professional footballer, playing for Rotherham and Sheffield United in the late 1880s upon the formation of the Football League. Featured in Immortals of British Sport at the maquette stage (pages 56/57), a 16 feet high dramatic sculpture by Vivian Mallock has now been unveiled at the FA’s training centre at St George’s Park in Burton-on-Trent. Wharton’s extraordinary story will, declared the FA, “educate and inspire a new generation of coaches and players from all backgrounds”.

‘Raddy’, Wales’ most successful olympian, is celebrated in Swansea

Paulo Radmilovic (1886 - 1968) , born and raised in Cardiff, son of a Dubrovnik-born father, was for 80 years Britain’s most successful Olympian until overtaken in medal haul by Steve Redgrave. An excellent swimmer, it was as a water polo player that his fame reached its zenith in that popular sport of the time. He appeared in five Olympics between 1908 and 1923, winning four gold medals - the first when he scored two goals in Britain’s final 9-2 victory over Belgium in the 1908 London Games - and the first Welshman to become an Olympic champion. A larger-than-life bronze fibreglass sculpture of ‘Raddy’ diving, first created for the London 2012 Cultural Olympiad, is now suspended dramatically in the exhibition hall of Swansea’s LC sport and leisure complex.

Greg Rutherford is the leaping man

A dramatic, 26ft high, stainless steel sculpture entitled ‘Leaping Man’ has been installed on the A421 roundabout by junction 13 of the M1 near Milton Keynes. It is modelled on long jumper Greg Rutherford gold medal winner at the 2012 London Olympics, who lives in nearby Woburn Sands. The extraordinary work, designed by sculptor Clare Bigger, was funded as part of the planning process for an adjacent building development. It shows the jumper in mid-air, in the sky, during a triumphant leap. Rutherford tweeted that the sculpture was ‘blooming amazing’.

Teddy Baldock is again the Pride of Poplar

Teddy Baldock (1907-1971) became in 1927 the world bantamweight champion in a thrilling fight at the Royal Albert Hall and, at age 19, Britain’s youngest ever world boxing champion of the modern era. At Langdon Park in Poplar, a fine sculpture by Carl Payne, has been erected as part of a community drive to provide inspiration and opportunities for local young people. Hugely popular in his prime and known as ‘The Pride of Poplar’, Teddy Baldock is still celebrated in London’s East End and now permanently in bronze.

Ken Friar, man and boy, is celebrated at Arsenal

Ken Friar served for more than 60 years ‘behind the scenes’ at Arsenal. The story goes that he was first employed, as a messenger, as a 12-year old boy after playing football outside Highbury and being caught trying to retrieve his ball under a car by Arsenal’s then manager, George Allison. Assistant secretary, secretary and managing director were amongst posts in which he served. A delightful bronze statue of ‘Mr Friar’ has been unveiled on the concourse at the Emirates Stadium reflecting his continuous association with the club since playing as a boy. 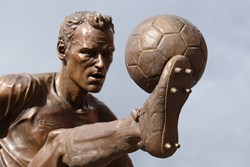 Dennis Bergkamp is the latest Arsenal star to be celebrated in bronze at the Emirates Stadium. A dramatic statue, being unveiled on 22 February, shows the Dutchman in flying action based on a memorable image of the striker controlling the ball in a match against Newcastle in 2003. Joining Arsenal in 1995, he became one of the club's legends through the quality and style of his play during 423 appearances. Many of his 120 goals are still vividly recalled. A sign of the changing nature of football in Britain, Bergkamp joins Thierry Henry as two foreign-born players of the Premier League era adopted and adored by the fans of the Gunners as 'one of their own' and now immortalised in bronze.

Philip Jackson, one of the country’s leading figurative sculptors, has created many of sport’s major works including the statues of Matt Busby, the United Trinity and Alex Ferguson at Manchester United - as well as Bobby Moore at Wembley , the Champions at West Ham and Peter Osgood at Chelsea. In November he was awarded the 2013 Marsh Award for Excellence in Public Sculpture for his outstanding 7-figure sculpture of aircrew within the Bomber Command Memorial in Green Park, London.

The statue of Dickie Bird has been a prominent feature in Barnsley since its installation, often for mischievous reasons, with Dickie’s upraised finger providing a target for pranksters leaving condoms, underwear and other items with the umpire. The local council has now installed a 5 feet high plinth which will hopefully reduce this activity. Dickie Bird, a local Barnsley man, keeps a watchful eye.

Olympic champion triathlon athletes, Alistair and Johnny Brownlee, were the inspiration behind a sculpture unveiled in a park in their home village of Bramhope near Leeds in Yorkshire. Commissioned by the parish council from local sculptor Shane Green, the sculpture is a permanent tribute to the achievements of the two brothers, Alistair winner of gold and Johnny winner of bronze at the 2012 London Olympics. The 8 feet-high work, Triathlon, symbolically represents the three sports of swimming, cycling and running in the event at which the brothers captured the world’s attention and the pride of Yorkshire.

Dorothy Round Returns To Dudley

Dorothy Round (1908-1982), born in Dudley in Worcestershire and for many years a Methodist Sunday schoolteacher, twice won the ladies’ singles at Wimbledon (in 1934 and 1937). She was the first overseas winner of the ladies singles at the Australian Championships (1935). A full-size statue was unveiled on 20 September 2013 in Priory Park in Dudley adjacent to the public tennis courts. Named “The Return of Dorothy Round”, the sculpture was commissioned by Dudley Metropolitan Borough Council from Scottish sculptor John McKenna. Famed for her ground-strokes, it was decided that a statue pose depicting her return stance should be created. A portrait bust of Dorothy Round also stands outside Wimbledon’s Centre Court. The 1930s were great years for British Wimbledon champions.

Nat Lofthouse is commemorated in bronze at Bolton

A fine statue of Bolton’s Nat Lofthouse (1925-2011) was unveiled at Bolton Wanderers’ Reebok Stadium on 24 August 2013. Sculpted by Sean Hedges-Quinn, the 9’ high sculpture shows Bolton’s legendary centre-forward leading his team out. A one-club man, with over 450 league appearances and scorer of 255 league goals together with 30 goals in the FA Cup (including both goals in Bolton’s 2-0 win over Manchester United in 1958), Lofthouse won 33 caps for England - memorably scoring two goals in England’s 3-2 win over Austria in Vienna in 1952 (he became ‘the Lion of Vienna’). The base of the statue carries Lofthouse's final words: "I've got the ball now, it's a bit worn, but I've got it."

Cuthbert Ottaway (1850-1878) was the England captain in the world’s first representative international football match, Scotland v England, at Partick outside Glasgow in 1872 (a 0-0 draw) - a match proposed by Charles Alcock (whose story is reflected in Immortals of British Sport). Ottaway was a versatile sportsman, winning ‘blues’ at Oxford University in football, cricket, racquets, athletics and real tennis. An England fan, Paul McKay, inspired the fund-raising drive to erect a new memorial at Ottoway’s grave in August 2013 in Paddington Old Cemetery in London. Supporters of the project included the FA, in its 150th anniversary year, the PFA and the Old Etonian Association.

Renowned Formula One engineer and designer Adrian Newey OBE (b.1958) has joined the series of sporting immortals from the motor racing world outside the entrance to Mallory Park circuit in Leicestershire. Newey designed cars which won the Constructors’ Championship ten times, more than any other designer, and he is the only designer to have won with three different Formula One teams (Williams, McLaren and Red Bull). The fine statue by David Annand, unveiled on 6 July 2013, shows Newey in familiar pose, looking up at timing screens with his headphones on. A delightful addition to motor racing’s immortals in bronze.