In the picturesque village of Sneem, an unexpected sculpture came into view. Who was he? Why was he there? It was the figure of Steve 'Crusher' Casey, a champion rower, wrestler and boxer - a man even Joe Louis was afraid to fight. How many other sporting statues of this kind were there around our islands? How many more stories of our sporting heritage could be celebrated through sculptures and memorials? 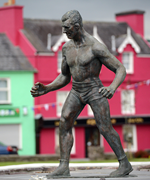 Steve 'Crusher' Casey (1908 - 1987) was one of Ireland's finest sportsmen - a champion rower, wrestler and boxer. One of a family of eight children from Sneem, Casey developed great strength as a rower and led an all-Casey crew. The brothers won the All-England championships and the 1936 Olympics beckoned (they could still represent Britain even though the village of their birth was now in the Republic). Just before the Games, the brothers were declared ineligible as no longer 'amateurs', having fought occasional wrestling bouts for extra cash. Sporting history could have been very different. They believed they would have won all six events at the Olympics in which they would have raced. Steve Casey became, instead, wrestling heavyweight champion of the world and a boxer of the highest class. In 1983, a family reunion took place in Sneem. The brothers climbed into the same rowing boat used in their glory days. They had not rowed together  for 50 years but, it was reported, the boat 'glided as smoothly as a raindrop sliding down silk'. Many in the crowd were tearful, watching the final performance of the 'greatest oarsmen and finest individual athletes Ireland had ever seen'. A powerful life-size statue of Steve 'Crusher' Casey, by Alan Ryan Hall, was erected in 2000 in the centre of Sneem. The Crusher is ready for any challenger.

The project led to many fascinating and pleasurable visits around the country discovering and photographing our sporting sculptures. See our interactive map of all the statues and memorials featured in the book. The range is considerable and sometimes unexpected: 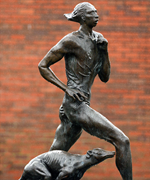 In the Welsh village of Mountain Ash, a delightful statue by Peter Nicholas continues the legend of Griffith Morgan (1700-1737), affectionately known as Guto of Nythbran Farm. Famed for his speed, developed from herding sheep and chasing hares as a child, Guto was by far the fastest runner in the region. Coming out of retirement for one final 12 mile race, aged 37, he surged past his younger challenger up the final hill to victory. Slapped on the back in congratulation by his ecstatic lover, he fatally collapsed and died in her arms. He was buried in Llanwonno where a memorial gravestone, laid in 1886, recalls that final race "completed in seven minutes within the hour" (a pace which would outperform even the 2012 Olympic champion Mo Farah). His grave, and now this fine statue of Guto alongside a greyhound, are focal points of the famous Nos Galan (New Year's Eve) Road Races started in 1958 by Bernard Baldwin who reflected that "the sigh of the wind and the call of the wild will forever sing the sad requiem of the greatest runner that ever lived".

The project emerged. By placing each subject in the era in which his or her sporting contribution was most prominent, this kaleidoscope of heroes and memories offers a different and vivid view of the history of British sport. This view has been captured in book form in Immortals of British Sport: A celebration of Britain's sporting history through sculpture.

In turn, this website contains a selection of sporting immortals with photographs and (in précis form) their stories. The flow of sporting sculptures around Britain continues. Our enthusiasm for commemorating heroes of the past in bronze or permanent memorial shows no sign of diminishing. We hope, through this website, to capture many of these continuing developments. There will be more immortals of British sport.