These heroes in bronze are the focus of this beautifully illustrated book which is a fascinating and often surprising journey in discovery of these diverse and inspiring monuments celebrating figures who have shaped our sporting history through the ages.

From W G Grace to Steve Redgrave, from Stanley Matthews to Red Rum, a vast array of sporting immortals are captured within the book’s 320 pages. Many are well-known but others unexpected, ranging from 18th century prize-fighters to modern day footballers and Olympians. Immortals of British Sport covers more than 20 sports as the book’s eight chapters explore different eras and unlock treasures of our illustrious sporting past.

Produced by an award-winning editorial team, the worlds of sport and art meet with more than 200 striking and specially commissioned photographs appearing alongside stories of each of these ‘immortals’. This kaleidoscope of heroes, and the sculptures and memorials that immortalise them, provides a unique and vivid celebration of Britain’s rich sporting heritage.

Ian Hewitt was a partner for more than 25 years in a leading international law firm. A former county tennis player, he sits on the management committee of the Wimbledon Championships. A general sports fan, he plays social golf and is a lifelong supporter of Southampton FC. He is a member of the Public Monuments and Sculpture Association. He is the author or co-author of three sports books: Sporting Justice: 101 Sporting Encounters with the Law (2008, SportsBooks); Centre Court: The Jewel in Wimbledon’s Crown (2010, Vision Sports Publishing); and Wimbledon: Visions of The Championships (2011, Vision Sports Publishing). The last two each won the award of Best Illustrated Book at the annual British Sports Book Awards.

Sampson Lloyd trained in theatre design before becoming an art teacher. He has been a successful freelance photographer for many years. Books to which he has contributed the primary images include: The Landscapes of London; Panoramas of London; St Paul’s: The Story of the Cathedral; The Landscape of Scotland; Ancestral Castles of Scotland; and Lochs and Glens of Scotland. He is the official photographer at the British Military Tournament in London. 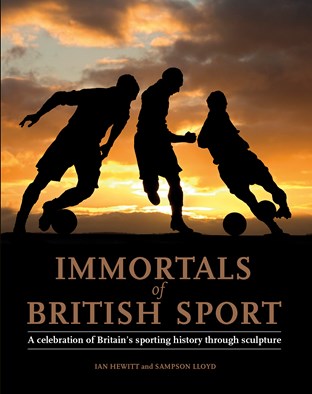 See inside the book Purchase book